LONG AGO, WHEN DINOSAURS AND ALMA COGAN STILL ROAMED THE LAND, THREE LADS FROM LICHFIELD, A SMALL PEACEFUL CITY IN THE HEART OF THE ENGLISH MIDLANDS, HEARD AN ELMORE JAMES RECORD....... 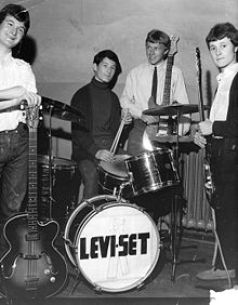 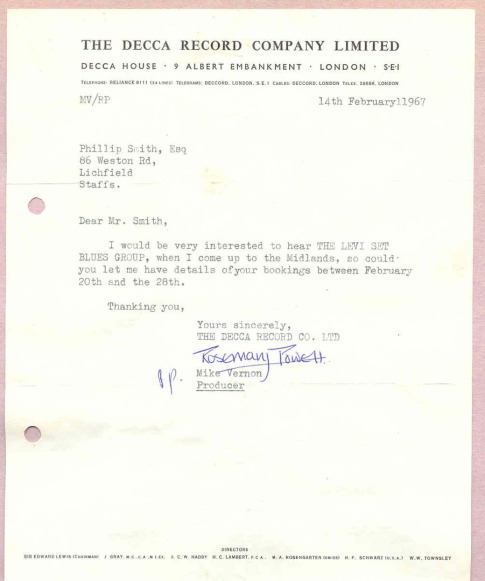 ALTHOUGH I WAS OFFICIALLY MANAGER, IT WAS A FRIEND, PHIL SMITH, WHO WROTE A LETTER TO MIKE VERNON AT DECCA EARLY IN 1967. AMAZINGLY WE GOT A POSITIVE REPLY, AND A LETTER FROM MIKE VERNONS OFFICE

AS OUR BOOKINGS BETWEEN FEBRUARY 20th AND 28th 1967 WERE APPROXIMATELY NIL, WE QUICKLY ARRANGED AN AUDITION IN THE WORKING MENS CLUBROOM IN THE TINY VILLAGE OF WALL, NEAR LICHFIELD IN STAFFORDSHIRE, WHERE MY PARENTS KEPT THE LOCAL PUB. MIKE VERNON WAS INSTANTLY IMPRESSED BY JEREMY, AND WITHIN A DAY OR TWO WE WERE ASKED TO PLAY IN THE INTERVAL AT A CLUB IN BIRMINGHAM CALLED 'LE METRO', UNDERNEATH THE ARCHES OF SNOW HILL RAILWAY STATION, THIS WAS TO BE ONE OF THE LAST GIGS THAT PETER GREEN PLAYED WITH JOHN MAYALLS BLUESBREAKERS, AS HE WAS IN THE FINAL STAGES OF SETTING UP HIS NEW BAND.

WE DID A COUPLE OF NUMBERS IN THE INTERVAL, THE SECOND OF THEM WITH PETER GREEN SITTING IN ON HARMONICA. HE THEN WENT INTO A HUDDLE WITH JEREMY AND MICK FLEETWOOD, AND THAT WAS THE END OF THE LEVI SET!

This is how Jeremy remembers it in his online blog....

In early spring of 1967, the Levi Set, consisting of John Charles on bass, his brother Ian on drums and myself on guitar, received a surprise announcement from a friend, Phil Smith that we were to be auditioned by none other than Mike Vernon.

At that time, Mike Vernon’s name was to the blues enthusiasts synonymous with the great recording producers of Stateside blues. His name appeared on most Decca records of British blues, the most predominant being John Mayall who was having chart successes with his Bluesbreakers and Hard Road albums, featuring Eric Clapton ad Peter Green respectively.

Unbeknownst to me, Phil had written in answer to an advertisement in Britain’s Melody Maker, a weekly music paper, which said that Mike Vernon was to be scouting the British Isles for blues talent and to contact him if anyone is interested or knew of a band or musicians who would fit the bill. Phil told him about this little fellow in Lichfield who played and sang like Elmore James. Mike replied that he would travel up to hear him, so for us to reserve a time and place for an audition.

I think it had to have happened this way, as I never would have answered the ad myself, and if Phil had told me beforetime that he was going to, I would have been reluctant.  Mike traveled up to Wall, a tiny village outside of Lichfield where we had set up in its local hall. We did a thirty-minute set, and Mike was impressed and enthusiastic. He returned a couple of weeks later with a tape recorder to get some of our stuff down. He later arranged a session at Decca records for us to record about four tracks, two of which, ‘Look Down at my Woman’ and ‘Who’s Knocking?’ appeared on Immediate label’s ‘Blues Anytime #1’ album. They were released under my name, as they featured me singing and accompanying myself on piano without other musicians. I remember that as a band, we also recorded ‘The Sky is Crying’ and ‘Travelling Riverside Blues’. I would be curious to hear those tracks someday!

Anyway, Mike told me that Peter Green was quitting John Mayall in order to form his own band and wanted to find another guitarist. Mike then arranged for us to play for half an hour between the sets of an upcoming John Mayall gig at Birmingham’s ‘Le Metro’ club so that Pete could see and hear me play.

I think it was a Thursday night, when John, Ian, Phil Smith and his brother Maurice, Fiona and I drove off, with Norman Hood at the wheel, to the club that was situated under the train lines at Snow Hill, Birmingham. People were only just starting to enter and I approached John Mayall who was standing in the middle of the club surveying the ‘battlefield’ it seemed! He was aware that we were to play between his sets.

Then I saw Peter Green, wearing a brown double-breasted jacket over jeans, sitting surrounded by fans (mostly young men), among whom was Clem Clemson, the guitarist in our local ‘rival’ blues band called ‘Bakerloo Blues Line’. Clem hailed from Tamworth, a town near Lichfield, and later went on to be the guitarist for John Hiseman’s Coliseum.

I walked up to Peter and introduced myself … well, I was about to introduce myself. He said ‘Jeremy? Jeremy Spencer?’ before I said anything.

I said, ‘Yes,’ and we chatted until it came time for their set. I had seen John Mayall’s Bluesbreakers with Peter Green some months previously at a Birmingham all-night venue, and had enjoyed it. Peter played his Les Paul with a pickup missing and suffered nothing from the lack! I had even asked John to play Otis Rush’s ‘I Can’t Quit You Baby’ that night, and I was impressed that he acknowledged my request.

And I was impressed with John’s first set that night at Le Metro as Fiona and I stood at the front of the stage on which Peter gave a stellar performance. Then we, the Levi Set played for about half an hour and Peter played harmonica on the first number: ‘Dust My Broom’.

John Mayall then played their second and last set, during which time I had pretty much discounted any idea of Pete wanting me in his new band. I was happy that a good time had been had and that was it. To my surprise, however, after their set, Pete asked if I wanted a drink and we stood by the bar, where he talked as though I was already in the band! He was saying stuff like, ‘Well, you can do a couple of Elmore things and then I do a couple of B. B.’s and so on like that…’

I finally said, ‘Are you serious? Do you like what I play?’

He said that I was the first guitarist that made him smile since Hendrix! Can you believe it? Then he showed me a page that he had written in his notebook while on his way up to Birmingham. It was like a prayer that said something like, ‘I can’t go on with this music like it is. Please have Jeremy be good, please have him be good.’

FOR A WHILE, DURING THE SETTING UP AND REHEARSING OF FLEETWOOD MAC - WHICH THEN CONSISTED OF JEREMY, PETER GREEN, MICK FLEETWOOD AND BOB BRUNNING ON BASS - WE WATCHED THEM GROW INTO A TIGHT BLUES UNIT, AND MANAGED TO GET INTO THE STUDIO WITH THEM, BUT WORK COMMITMENTS MEANT WE SAW GRADUALLY LESS OF THEM. THEY WERE ALWAYS WELCOMING, THOUGH, AND A FRIEND - TERRY GALLAGHER - AND I WERE OFTEN DRIVING THROUGH THE NIGHT TO CATCH A GIG, BEING REWARDED WITH GREAT MEMORIES, LIKE BEING GIVEN A ROSE BY CHRISTINE PERFECT AND KIDDING AROUND WITH DANNY KIRWAN.